» Çavuşin (Nevşehir) & the tuff rocks beside the path to Göreme «

Çavuşin is located on the route from Göreme to Avanos, just before you reach the turnoff to Zelve. Here Göreme is in the south (on the right outside the panorama) and Avanos (on the left side of the picture) is much lower on the banks of the river Kızılırmak. Behind Çavuşin the Aktepe rises. Its foothills form fertile valleys with fantastic tufa erosions and in the middle of them there are lots of caves, hermitages and cave churches. You get a wonderful impression of this on the way to Göreme.

Despite a strong earthquake in 1939, the large tuff rock in Çavuşin was still inhabited until 1963. At that time even small tremors were enough to cause the already damaged cave dwellings and last columns in front of the large cave church to collapse.

Here we are underneath the old cave church (John the Baptist) with a completely broken down front part.

In the Basilica of St John the Baptist.
After the Greek-Turkish population exchange of 1923, the church was used for other purposes. Most of the colourful frescoes were destroyed in the process. Here, the free space between the columns was bricked up, the columns and walls were provided with small niches to create nesting places for pigeons (pigeon guano as fertiliser) and depressions (feeding troughs) were made in the benches surrounding the walls and small holders were made to tie up animals. 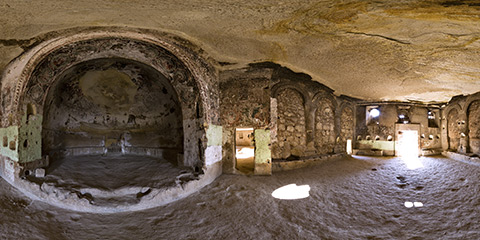 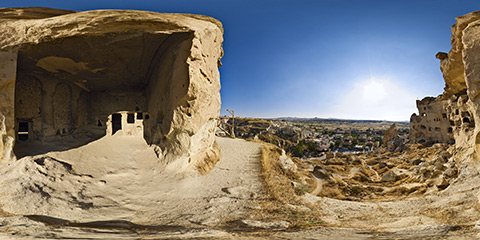 South of Çavuşin, on the way to Göreme, you can quickly reach the natural wonder with its tuff rocks. As erosion is the first to erode the softer rock, upright rocks are formed, which are protected by harder "hats".

The large rock houses a small burial church with an adjoining prayer room. The columns do not have a supporting function, but belong to the replica of a Byzantine chapel. A simple red wall painting and ornaments indicate an age of more than 1000 years. 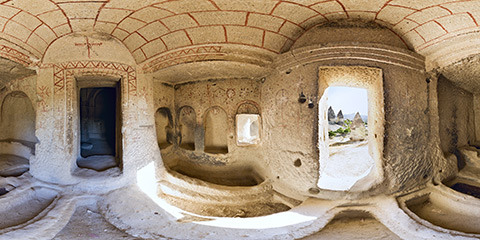 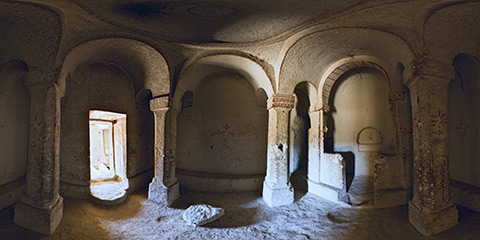 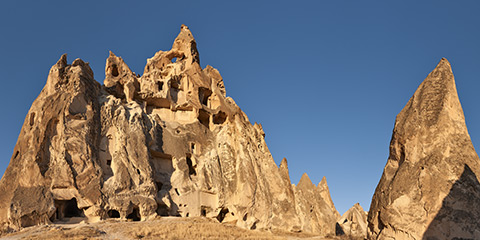 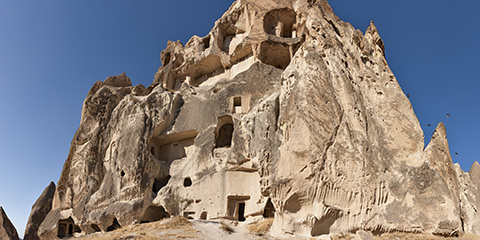 Setting sun at the end of a cloudy day. On one side you look into the furrowed foothills of the Aktepe with its bizarrely charming valleys. On the other side is the narrow plain that stretches from Göreme to Avanos. Behind it again gentle tuff hills with eroded flanks.

The double rock in the background marks Uçhisar. With an altitude of about 1350m, this is the highest place in central Cappadocia. Göreme is already 200m lower and it goes down to 930m in Avanos.