Already in Roman Byzantine times the origins of monastic life can be found in the Soğanlı valley. Many single standing tuff rocks were hollowed out to churches, monasteries, economic and living rooms. Some of them were decorated with magnificent frescoes and wall decorations. The frescoes were often donated by rich families to buy a better afterlife. Unique in Cappadocia is the complex around the Kubbeli Kilise, where the rock was also carved from the outside. This made his religious destiny visible from afar.

Before you reach the centre of the Soğanlı valley, you will find the Tokalı Kilise high up on the slope. Inside it is decorated with red and green paint (directly on the tuff) and frescoes. 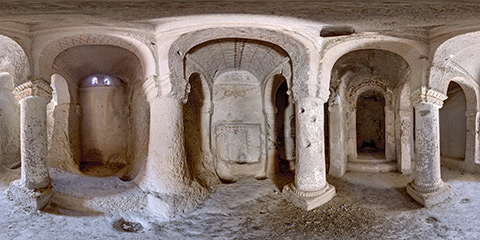 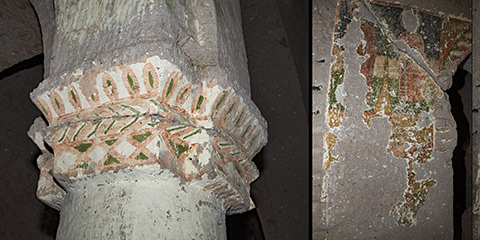 When you follow the road to the north at the entrance to the village, you first get to Karabaş Kilise (Blackhead Church).

It is part of a monastery with several rooms inside the tuff rock. One of them is covered with two layers of colourful frescoes. The inscription above the entrance mentions the year 1060/61 and as donators the Protospatharios (a honorary dignity in the later Byzantine Empire) Michael Skepides, the nun Katharina and the monk Nyponos.

The central representation in the apse is the Communion of the Apostles. Jesus is depicted twice. Both to the right and to the left he turns to six apostles.

Multi-View-Point panoramas of the ceiling frescos with representations from the life of Jesus. 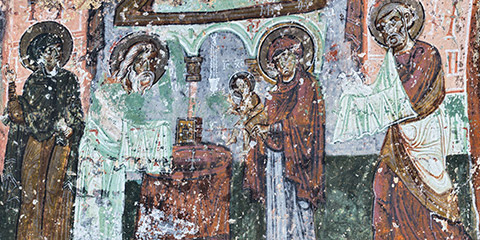 Single photographs of the frescoes on the two long sides of the cave church. 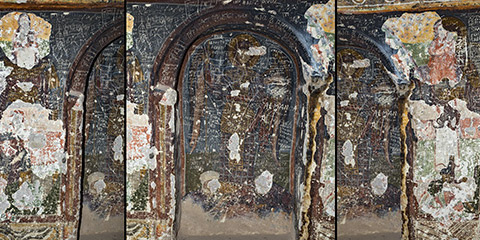 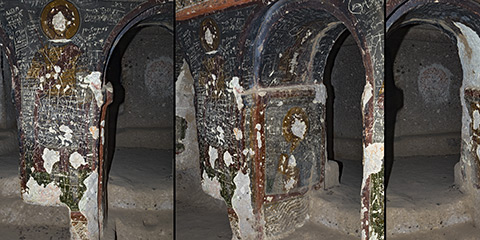 At the end of the street you reach the Yılanlı Kilise (Snake Church), which is also called Canavar (beast) Kilise.

The conical tufa cone contains the church with frescoes from the 11th and 13th century.

To the right of the door you can see St. George, the dragon slayer. The church probably owes its name to the snake under the hooves of his horse. George is a Cappadocian saint from Potamia/Başköy.
Also interesting are the Greek inscriptions from the end of the 19th to the beginning of the 20th century. Such inscriptions of the former Greek inhabitants can be found in many cave churches.

If you go back on the other side of the valley, you come to Kubbeli Kilise (Domed Church).

It crowns an impressive rock complex in the Soğanlı valley and is the most striking of the cave churches within a carved rock cone. 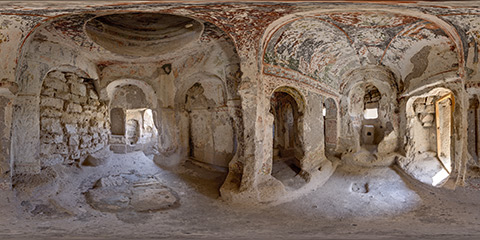 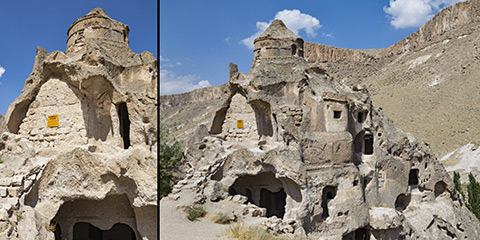 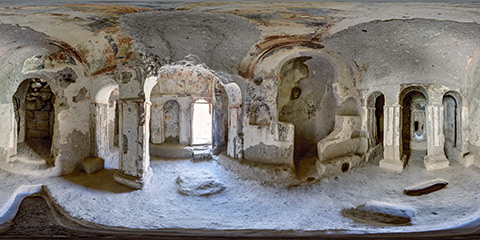 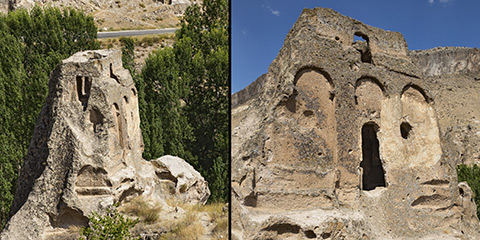 Nearby there is another rock-church with a hewn dome. From here you can see the Karabaş Kilise on the opposite side of the valley.

To the right of the road leading from the village to the west is the so-called Soğanlı Han.

About 200m further you reach the Barbara or Tahtalı Kilise.
The frescoes can be dated to the beginning of the 11th century by inscriptions.

The name Geyikli Kilise comes from the fresco of a deer that has disappeared in the last decades. You can find this monastery on the slope opposite the Soğanlı Han.

It is hardly recognizable that this cave church was once decorated with frescoes.

When asked whether a facility is a monastery, such a dining room is always a very strong indication of it.