Conegliano
In front of the Duomo di San Leonardo is the Scuola dei Battuti with its arcade. The external frescoes are the largest in Veneto and depict scenes from the Bible. They were created by Ludovico Pozzoserrato in 1593.

Ponte Vecchio in Bassano del Grappa
Since the early 13th century a bridge crosses the river Brenta here. After several renewals the todays construction of the famous architect Palladio (Andrea di Pietro della Gondola) dates back to 1569. Destroyed in World War II, the bridge hab been renewed by the Italian mountain infantry (Alpini). To honour them it is also called "Ponte degli Alpini". In 2017 the bridge is extensively renovated.

Chioggia
Chioggia is at the southern end of the Venetian lagune. Close connected to Venice, Chiogga played an important role in the fight against Genua in 1379/80. 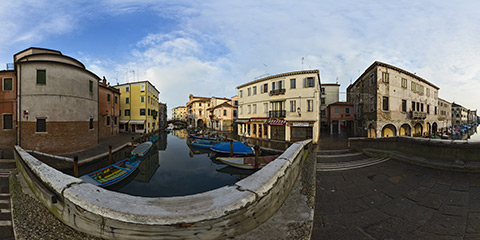 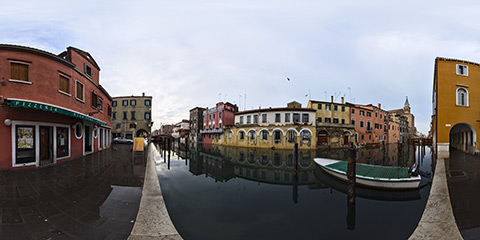 Marcon
Graffities in a pedestrian underpass at the railway Mestre - Portogruaro. 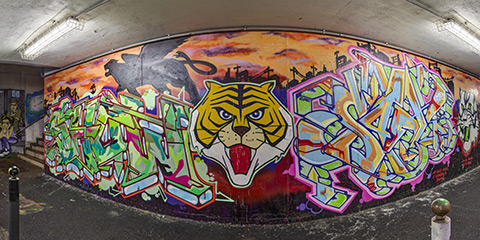 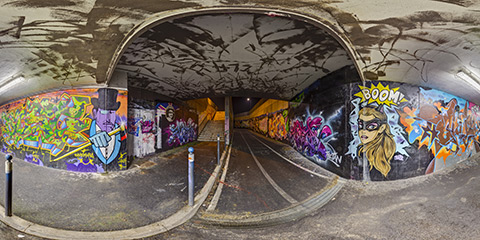 Padua
Early evening on the Piazza Delle Erbe, 1st of January
One of the big markets in Padua takes place here. The second one, on the Piazza delle Frutta, is behind the big building, the Palazzo della Ragione. Built in 1218 it served for the court and the city council. Today it is still very impressing.

Malcesine on Lake Garda
. This small sandy beach was the first port of the town and is now called Porto Posterno.

Below the castle, whose origins date back to the 6th century, you can still find many old houses. The centre of the village with 3700 inhabitants is the small marina.

Faenza: early evening at the Piazza del Popolo
Faenza is a small town with nearly 60000 inhabitants, south-east of Bologna. In the Renaissance the city became very famous for its elaborate pottery, which had been exported to many European countries.

The central square "Piazza del Popolo" has its origins in Roman times. The development to its present appearance began in the 15th century when the loggia of Palazzo Manfredi was built and ended around 400 years later.

The monumental fountain in Piazza della Liberta stands between the Clock Tower and the Cathedral. The water supply was always a problem for the inhabitants of Faenza, because the water quality of the wells within the city had to suffer again and again from heavy pollution. At the end of the 16th century the construction of an aqueduct was started, which led the water from a good source of drinking water to this fountain.

Just north of the "Piazza del Popolo" is the "Piazza della Liberta". It is dominated by the unfinished brick facade of the cathedral, which was built from 1474 to 1520 above a previous building. The "Torre Civica", the clock tower, also stands here. Destroyed by German troops in December 1944, it was rebuilt shortly after the war.

Chiesa di S.Croce in Brisighella
In the 16th century, this small church was built as an oratory for the Brotherhood of S. Croce. Opposite the confessional there is a restored 16th century painting by Gian Battista Bertucci. The bird cages hanging from above are used for festivities where white pigeons are allowed to fly. A small chapel next to the entrance is dedicated to a group of terracotta figures gathered around the deceased Christ (15th/16th century). 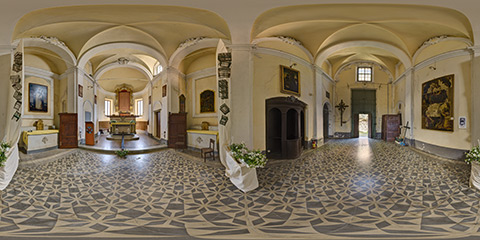 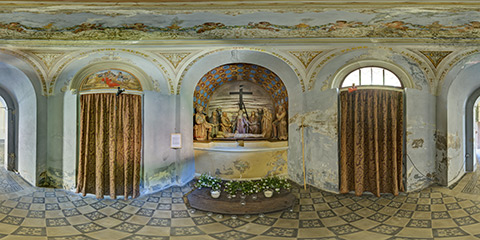 Matera in Basilicata is a settlement that has been inhabited since the Neolithic period and is known for its caves that were inhabited until the 1960s. Since 1993, Matera has been a UNESCO World Cultural Heritage Site and was voted "European Capital of Culture" for 2019. From Piazza Vittorio Veneto, a path descends into the historic Sasso Barisano district. The passageway carved out of the tuff is clearly visible. In the Stone Age, people had already built their dwellings into this soft rock and had extended, changed and inhabited them for thousands of years.

Matera: Chiesa San Giovanni Battista
This church was built between 1229 and 1236 and replaced a Benedictine chapel. The church was outside the city walls and belonged to nuns. In 1480 the church was abandoned by the nuns, because they suffered constantly from soldiers' raids. More than 200 years later reconstructions started and went on for the next 100 years.

The late-Romanesque "Duomo della Madonna della Bruna" from the 13th century is situated on top of one of the hills of Matera's old town above the area called "Sasso Caveoso".

Panoramic view from the entrance of the cave church Chiesa di Santa Maria de Armenis to the district Sasso Caveoso.

Later in the afternoon in front of the church of San Pietro Caveoso with a view at Matera's old houses and the former cave dwellings on the opposite slope.

Manduria is a small town in the south of Apulia between Taranto and Lecce. At the western end of the road stands the Porta Sant' Angelo. This gate leads to the historical centre. Here on the street is also the baroque church of Parrocchia di Santa Maria Di Costantinopoli from the 16th century with its colourful dome. The best known product of the region is the "Primitivo di Manduria" red wine.

Lecce in Apulia
Late afternoon view over the roofs of the baroque town. The high tower is the Campanile of the Cattedrale di Santa Maria Assunta. The legendary foundation of Lecce dates back to 1211 B. C., followed by conquests, ascents and downfalls. It began to flourish in 1550 under the reign of Charles V of the Habsburg dynasty, who had the city developed into a heavily fortified administrative centre.

Early evening in Piazza Duomo. Shortly before its sinking, the sun makes the church tower and building tops glow for the last time. Next to the cathedral with its baroque portal, the square is surrounded by the bishop's residence and the Diocesan Museum. For many buildings, the tufa of the surrounding area, which was easy to work with, was used, stimulating the sculptors to create rich and playful decorations of the building, the Baroque Leccesian style.

The disadvantage of the tuff's easy machinability is its low resistance to the weathering effects of the environment. Here you can see this clearly on the portal of the Palazzo Carrozzo, which is completely devoured.

The Roman amphitheatre of Lecce was built in the 2nd century and had space for about 25,000 spectators. At that time, however, the rows of seats reached far beyond today's level. Earthquakes and decay levelled it so far that it was no longer visible. It was not unearthed until the Mussolinidictatura

The "Mosaico della Lupa" is surrounded by the superstition that it is bad luck to step on the wolf. In 1953, the mosaic was created in four months' work by master mosaicist Giuseppe Nicolardi in Piazza Sant' Oronzo and soon became a landmark of the city of Lecce. After tourists began to take loose mosaic stones as a souvenir, the company of Valentino Nicolì restored it in 2017. The now 99-year-old Giuseppe Nicolardi was also present at the presentation of the restored work of art in July 2017. In moving words he reported on the creation of the work.

Otranto
In the south of Apulia, Otranto is a small town with a long history. As early as the middle of the 2nd millennium BC, relations with Greece can be proven. After Greek colonization, Roman conquest and later membership of Byzantium, Otranto became Norman in 1070. The then existing castle had to be repaired and strengthened. It was given its present appearance under Alfons II of Naples from 1481 onwards, after Otranto was the first city on Italian soil to be conquered by the Ottomans the year before.

on the Piazza Basilica in front of the Cathedral in Otranto

Martina Franca in Apulia
At the Piazza Plebiscito in front of the Basilica di San Martino and the Palazzo dell' Università
Above the main entrance to the Basilica di San Martino a relief shows St.Martin, the patron saint of the city. Legend has it that he saved the city several times from beeing robbed. There is a lively historic center with narrow alleys and baroque houses.

Piazza Maria Immaculata is directly adjacent to Piazza Plebescito with the Basilica di San Martino. Until the 1960s, market was held daily under the arcades. Today, this square is used by several restaurants.

With its baroque entrances to the white houses and narrow lanes, the centre of the lively old town has a very special character.

Chiesa di San Domenico
This baroque church was built in 1745 by the Dominican monk Cantalupi. It is attached to a Dominican convent from the 15th century. The interior contains five altars, made of polychrome marble, and paintings from Domenico Carella and Pietro De Mauro (2nd half of the 18th century).

Cathedral Maria Santissima della Madia in Monopoli, Apulia
The area around Monopoli was already inhabited in the Stone Age. But its real story begins in the middle of the 2nd millennium with a large settlement. Later Greek settlers arrived and at some point the village was named Monopoli. As with the rest of Apulia, the ruling dynasties change. After the demolition of the predecessor church, the cathedral was built in 1742. Thirty years later it is finished, but in the following centuries it is constantly being supplemented and further decorated.

medieval cities and villages in Tuscany

San Domenico in Arezzo is a single nave church building from the 13th century. Its walls are richly decorated with frescoes made by local artists up to the 15th century. The most important work of art is the cross floating above the altar, created by Cimabue between 1260 and 1270. Cimabue was the nickname of the Florentine artist Cenni di Pepo, who later became Giotto's teacher.

Pienza
In 1458 Aeneas Sylvius Piccolomini, born in Corsignano in 1405, was elected Pope. He gave himself the name of Pius II and decided to rename his birthplace Pienza and to transform it into a model city of the Renaissance. The architect Bernardo Rossellino received the commission. Work on the cathedral began in 1459. The location directly on the slope of the town hill led to a lowering of the ground. This can be clearly seen from the crack that runs right through the floor tiles and the wall (in the panorama covered by a column). In order to detect changes in the crack, the wall was equipped with several measuring instruments. Currently (2020) extensive restoration work is underway. - UNESCO World Heritage since 1996

Chiesa di San Michele in Foro, Lucca
Lucca is a town that is somewhat atypical for Tuscany. While most of the villages were built on a hill, Lucca is completely flat. Surrounded by a 4km long city wall, large parts of the historical townscape have been preserved. The Chiesa di San Michele was built on the site of the ancient Roman forum and was given the additional name "in Foro". Its construction began in 1143.