Continued from Güllüdere
Once you have hiked up to the viewpoint through one of the two Güllüdere valleys, you can descend back down to the Meskendir valley through the Kızılçukur valley.

The viewpoint is at the end of a road coming from Ortahisar. Since bus tourists are also driven here, snack bars and souvenir shops have set up next to the car park. You don't have to walk far to leave the tour groups behind. Soon you come to the rock with the hermitage of Niketas. The relief ceiling cross is easily visible from the path. 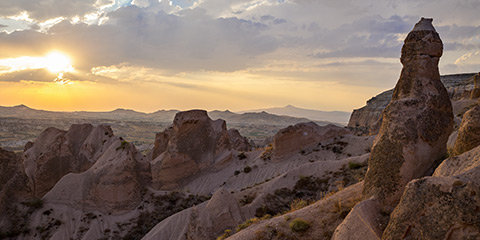 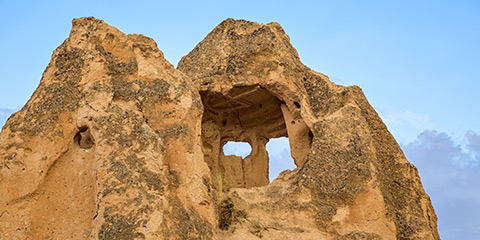 Üzümlü Kilise = Grapevine Church
. Ornamental ceiling fresco with central cross in the entrance area. The cracks led to fears that the fresco would flake off over a large area (2013). This 8th/9th century cave church was restored from 2014 to 2016.

The church has its name from the grapes at the roof. As a symbol of fertility they surround the holy cross. According to an inscription this church is dedicated to Niketas. He can be seen left of the crucifixion, on top of a column. Another inscription mentions Eustratios, the donor of the frescoes. On the sides are the 12 apostles.

At the end of the Kızılçukur valley, you reach the path through the Meskendir valley.
If you turn north here towards Çavuşin you will soon reach this rocky landscape and...

...shortly afterwards to this single tuff cone with the Zindanönü Kilise. 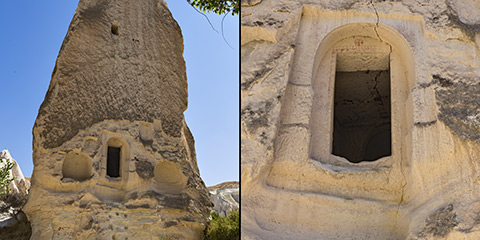 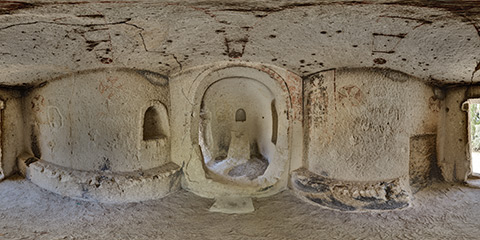 However, if you turn south towards Göreme, you enter the narrower Meskendir valley.
There, the openings of former cave dwellings and pigeon lofts can be seen everywhere in the rocks.

Further up, the path leads through a tunnel with a small watercourse. Before the tunnel exit, it has partially collapsed. In the rocks above lies the Meskendir Kilise.

The exceptionally fine stonework inside the cave church is only further decorated by a simple red colour.

In contrast to the interior, the entrance area had been decorated with a colourful fresco. 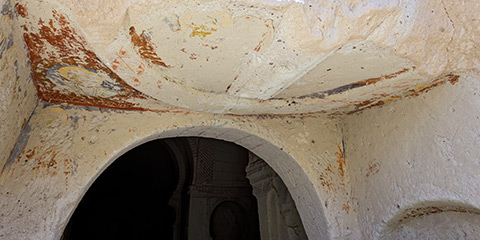 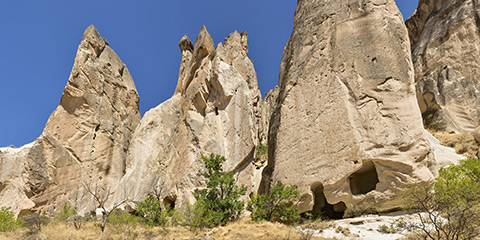